CARS, ERAS, AND WHAT BEATS HEART

I’m going out on a limb, but I’m hoping the limb won’t snap and dump me on the ground. Like many people, I’ve had enough bruises this winter, but here goes.

Everyone knows that the American car industry is in a coma with the life blood barely blipping. As I write this, Ford and GM shares are under a couple dollars, which nearly matches their price after the Second World War. The companies remind me of a couple Frankensteins, sutured and patched, pathetically staggering around to the point where no one has even pity for them. At least I always felt kind of sorry for Frankenstein.

A week ago, my girlfriend and I once again managed the six-hour commute to Albany, NY. During this particular drive, dull interstate basically the entire way, I looked at cars. I looked at everything I passed and that passed me, and I came to the conclusion that I didn’t much care for any of them. Most were unappealing—generic blobs with fancy headlights and taillights at the corners. The lights had absorbed most the of the design audacity, the rest seemed to be a platform—sedan, compact, SUV—each a slightly elongated or steroided or boxy variation of the theme. The only way I could tell who manufactured which blob was by locating the logo. I know that modern cars require minimal maintenance, are much safer, that some are fuel efficient, but any advantage seems to end there. To my eyes they are soulless transportation devices, not cars.

When I was younger, I liked cars. My father had raced hill climbs during the late 40s and early 50s and was obsessed with anything automotive. He’d raced for MG, his factory mechanic newly arrived from Italy in 1947 or 8, having just machined a Ferrari engine with Enzo, or so my father later insisted. My dad even bought the first Porsche sold in Canada in 1952, a specially prepared one-off with aluminum hood and doors, hand-ground cam, the machine so beautiful my dad ended up not being able to race it. I still have photos of a beaming face in a loose fitting suit standing at the Montreal car show in front of this gleaming silver miracle of curves. And he managed this on an engineer’s salary, not from any family money. That’s how much he loved cars. 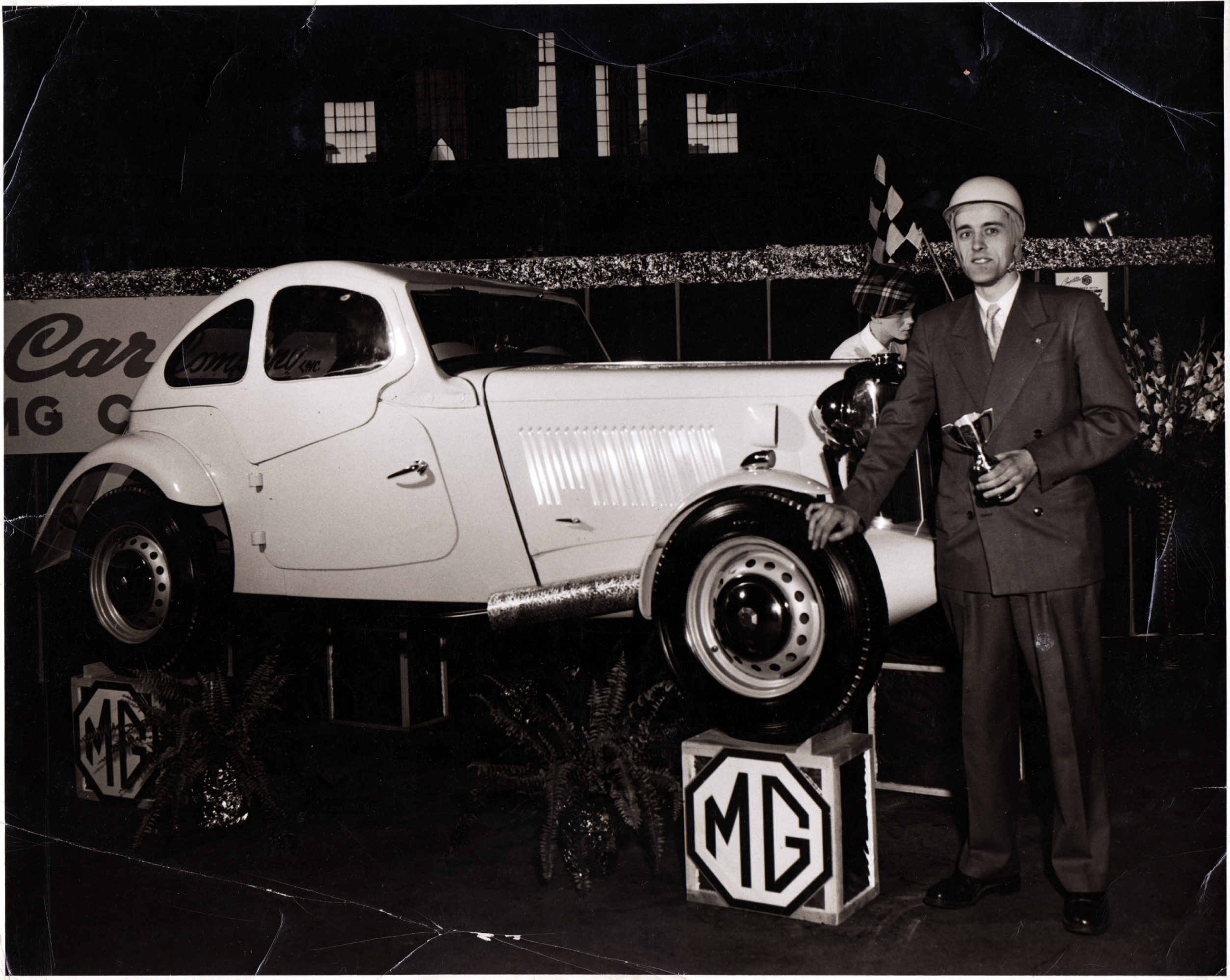 So the car passion crackled around me from a young age. Our family went to F1 races at Watkins Glen every year during the 60s, we owned the first BMW 2002 in New England, our final house, designed by my dad, was a double-bay garage with a small apartment above for people. I think he added this reluctantly.

In 1975 I bought a Porsche coupe much like his original car; I managed it by selling paintings—again, no family money. Of course it wasn’t much over $1,000. Every time, and I mean every time, I sat in a diner and looked out at that low sensuous shape, I was delighted. The car gave me immense aesthetic pleasure, even its shadow on the pavement as I drove, or its ivory dash and thin steering wheel, or the bark of its four cylinders reverberating down a city street, or its inconvenient gas tank which required opening the front bonnet to fill. I still miss it and want another one. Annoyingly, now that car would be worth around $100k, and I must accept that my next drive will only be in my dreams.

A friend of mine in Pennsylvania sells vintage cars. He won’t touch anything newer than 1972. Lately, he’s been selling every car he can get, traveling constantly to car auctions across the country, tracking down endless leads—he buys a lot of cars. Why is his business chiming when no one is supposedly buying automobiles?

Here comes the limb. I think most modern cars have lost their gut appeal, the “I’ve got to own that one” draw. They’re safe, they drive fine, are full of conveniences, but they are dull, and they don’t drive hearts to beat recklessly or hands to reach deep into pockets. I guess no one is willing to risk financial ruin for dull and generic with fancy headlights, a dozen airbags, and a press-button locking system.

I have a 1966 Chevrolet Impala with the original paint and original 327. This car gives me as much pleasure as the Porsche did though it’s very different, based on an entirely different philosophy of what a car should be—so much so that I’m sure my father would’ve hated it. How many manufactures with that level of diversity can we find today? Individuality in a manufacturer used to appeal to the individuality in the consumer, and we’ve lost that. 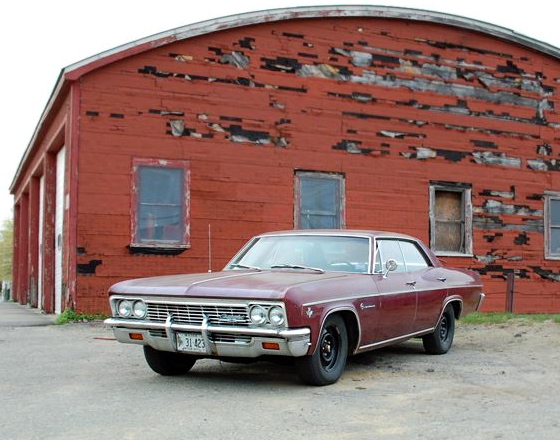 I modified my Chevrolet when I bought it. I’d owned a 1963, 1964, and 1965 Impala, and I knew just what the 1966 needed to be mine, look good, and run without problems, which, besides a starter motor ($32 with core), it has done for ten years. I’m able to perform all the labor myself, so when I motor along the highway, the invaluable vent windows angled, my mind visualizes all the intricate mechanisms; I understand them, and it adds to my enjoyment. The Chevrolet was a primarily mechanical solution while modern cars are at least 50% electronic solutions. I can’t work on those, and apparently neither can anyone else.

During the 1980s when people started to collect 1950s and 1960s cars, there was the nostalgia argument to explain the interest. But 30 years later, not many people are collecting 1980s or 1990s cars, are they? And most 1970s cars (a few of the early ones still carried the 1960’s passion) have rightfully met with the crusher or the scrap yard. It wasn’t nostalgia after all; it was inherent appeal. One way to tell a classic design is to see how it holds up when the car is worn, slightly dented and rusty, maybe a chrome strip missing; does it still look good?

If I could walk into a car dealership tomorrow and purchase my 1966 Impala or my 1956 Porsche coupe brand-new at a reasonable price, I would find a way to get the money. I would have to because I’d crave the things. I know this fantasy is not possible for a number of reasons, but I think you get my point. Sure there are a few modern cars that are breathtaking, but they are almost all high-end sports cars, and for most of us, unaffordable.

Then there are the retro-designs inspired from the 1960s which I keep noticing, wondering about, but in the end, I’m not sure they hold up. They are cars with a borrowed personality and though they’ve borrowed well, I’d still prefer something original. I want a car I can gaze at from a diner window, that will make my heart beat every mile, that I will look cool standing beside. Whenever my girlfriend drives the Impala, and I watch her pull away, she looks so good in the car I laugh. It’s not the same when she’s in her Jetta.

I try to imagine Humphrey Bogart in an SUV or James Dean in a Prius, but it’s just not the same. Notice that even in many modern movies the heroes drive old cars. As with shoes, there’s comfort and convenience, then there’s style. Of course many people can’t afford to think past the need for reliable and cheap transportation, but my Impala has been less expensive to run than my Honda, which I use during the winter. I’m lucky though—I don’t have a daily commute and I don’t have children. That, I know, would change everything.

What I miss in cars is uniqueness, risk in design, personality, and that unpredictable combination of elements that generates longing, that something which makes me want to own it, drive it, and damn the lack of cup holders. I want an automobile that offers me consistent pleasure in aesthetics, that adds to the good moments in my life, maybe even gives me the illusion of being keyed close to cinematic when I’m gliding down the highway toward my uncertain future. When that magic returns, perhaps the buyers will return as well.

2 thoughts on “Old Column from the Great Depression Found!”