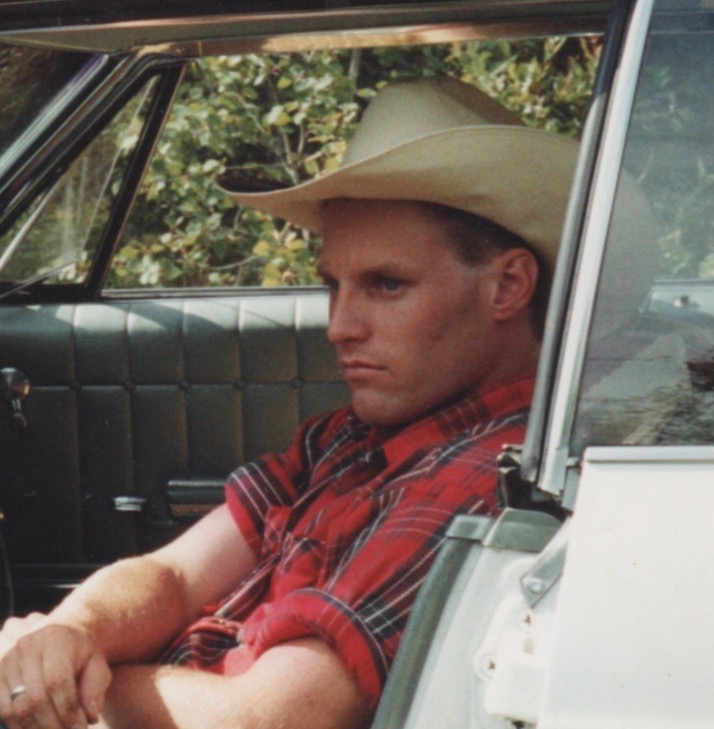 The three of them sat across the ripped bench seat of the Biscayne. Cody had bought the car a couple years ago from a farmer who’d marooned it in a field, and though it only had a six-cylinder that smoked, it would take them to the coast. Brad had purchased another new car, the red Camaro already traded in, but his rides were always sports cars and didn’t seat three across a bench. Cody could smell Stephanie beside him, heard Brad against the door.

“Why are we doing this?” said Brad for what seemed like the fifth time, taking yet another sip from the Thermos of rum and coke, then replacing the cigarette.

“I wanna see the ocean,” she said.

“It’s so late. It must be nearly four in the fucking morning.”

“Two,” said Cody, stretching out his damaged leg as best he could. Nine months and the thing hurt most of the time.

“Besides, it’s such a beautiful night,” she said.

It was. The landscape seemed draped in a damp shroud, or almost hermetically sealed in translucent verdant cling-wrap, the moonlight so unusually green. Was it because it was April, or was it always this way? Cody couldn’t remember.

“Turn the damn headlights back on,” said Brad.

“No, leave them off,” she said. “You can really like feel the outside this way. It’s kinda cool.”

“There’s no one on the highway,” she said. “Besides, you can see fine this way.”

“Zen driving,” said Cody. They were on the four-lane section of the Mohawk Trail now.

“Fucking Zen nothing. What would you know about Zen?”

Cody drove with some degree of frustration. He wasn’t sure why he was Zen driving with them; he certainly shouldn’t have told them his name for it. He knew it sounded foolish, but the way the car began to float along the smooth highway, the way the countryside appeared so ordered and quiet, the odd calm he always felt as the park-like world drifted past the windows and over the windshield, it was something he held sacred. Why did he want to show her? Was he somehow flirting? Stephanie was his type—physically; he didn’t know much about her beyond that. It was annoying that he and Brad must desire the same looks in a woman: petite, high breasted, disheveled hair more complicated than any maze. And her smell. It was taunting him with every mile east. He reached behind him for a beer though he didn’t want to drink, his stomach acidic and hungry. Brad was doing enough drinking for everyone. Regardless, she kept rubbing Brad’s leg, nibbling on his ear, or kissing his cheek, drunk or not.

Stephanie and Brad had started drinking and then called him late, almost ten o’clock, begging him to join them at Brad’s apartment. Cody realized now that Brad had just wanted him to drive them to the coast because he was too drunk. As Brad had whispered to him, “She gets these ideas, and she doesn’t like to be denied. Please please just go along with me on this one.”

“We’ll have champagne for breakfast,” she said. “But I wanna see the ocean first.” Stephanie was from New Mexico, a sophomore at Bennington. Her father had sent her a special bottle of champagne for her birthday, and she insisted on drinking it on the beach. “We’ll be there for the sunrise, won’t we?”

“He’s so funny, isn’t he? Such a giant teddy bear.” She rubbed his leg again. “Is he still helping you with color?”

“What’re you talking about?”

“Brad told me he’s been teaching you color theory. He’s such a tremendous and engaging teacher.”

Brad hadn’t been teaching him anything.

“Aren’t you so into color?” she said. “Brad said you wanted to be an artist too.”

“Just that you’d been really depressed and that he was trying to get you into art as therapy. He really is the sweetest guy I’ve ever met.”

He didn’t respond to that either. Instead he said, “You ever notice how last names that are colors are always cool tones?”

She glanced at him. “Are you sure?”

“It really doesn’t matter though, does it?”

“I just thought it was interesting, that’s all. You think people would want to have bright colors as last names, but they don’t.”

“When will we be at the beach?”

He accelerated, the ancient six blowing smoke in the agony of being roused from its rolling torpor.

“Why are you going so fast?”

“They probably don’t like us driving with no lights.”

“Are they coming after us?”

“Then pull over. What’s the big deal?”

“Should I wake Brad?”

“Just do your best.” He searched the rearview mirror for headlights.

“In a minute.” A rest-stop-ahead sign flashed by, his eyes completely adjusted to the darkness by now.

“Can’t you hide the booze.”

“Don’t.” He said it in such a way that she stopped moving. His attraction to her was flipping to dislike. Headlights appeared in the distance as he saw the entrance to the rest stop. He keyed off the car, the compression of the engine slowing them. The hand brake was needed to stop them in the darkest section of the lot; using the foot brake would’ve been a red flare of stupidity. He quickly pulled off his windbreaker and covered the beer and the rum bottle, praying the headlights would continue past. At least she was silent, Brad still snoring. The lights turned toward them. “Pretend you’re asleep.”

He heard the vehicle approach rapidly and then slow, felt the hot beam of the spotlight across his eyelids, searching his face and the interior of the Biscayne. Then the sound of tires chirping on sandy pavement. He cracked his eyes: the cruiser’s taillights were moving away, a second car careening along in the darkness of the highway, the cruiser’s blue lights beginning to pulse as it took up chase. “Was that ever lucky,” he said to himself. “Thank God for the other car.”

She seemed to consider this. “Are you that scared of cops?”

“I’ve had a few tickets on my motorcycle.”

“The one Brad helped you race?”

“Didn’t he finance it or something?”

He caressed the motor to life, pulled on the headlights, and headed out of the rest area. Within a couple minutes they passed the blinking cruiser with the other car pulled over, the cop leaning in the window, the gumballs illuminating the scene like a blue strobe.

“The cop arrested someone else,” she said.

He considered putting on his windbreaker over his T-shirt again, but as much as it annoyed him to admit it, he wanted her to see his arm muscles. She probably didn’t care though; Brad had arms like frog legs.

It was still night when they arrived at Salisbury Beach, the place closed for the season. Brad had woken and began drinking again, Cody amazed that someone could consume so much alcohol. He was good for a few beers now and then but had never liked the feeling of being out of control. He parked near the entrance building, the gate shut, in the distance the deserted amusement park and fun-o-rama brooding in the moonlight. The three of them walked toward the water, Brad carrying the champagne and smoking a cigarette, his arm around Stephanie. He seemed livelier after his nap.

“This is really good shit, you know?” He held up the narrow-throated bottle.

“My dad wouldn’t send me anything cheap.”

“We don’t have any glasses.”

“You guys share it,” said Cody, not that they’d asked. Suddenly he felt lonely. Watching her round ass move across the sand didn’t help.

Brad popped the cork, mouthing the overflowing bottle like a porn star. The two of them settled on the sand, drinking, laughing, Stephanie kissing him every so often, the waiting for the dawn forgotten. After ten minutes Cody wondered if they even remembered he was there. He walked toward the waves, the soft sand difficult for his leg. A lapping surf, white lines of foam cracking open and dissipating, the horizon black and trembling. He slipped off his boots, socks, windbreaker, T-shirt and jeans, and ran into the ocean, the plunge into darkness slapping angrily at his heart, an icy void surrounding his body for an instant like the fear of crashing. That was all he could stand. He staggered clumsily as he waded back, nearly falling, the ferris wheel an inverse frozen firework above the dark land.

She was standing by his clothes. “Are you crazy or what?”

He was shy that she should see him naked, but also slightly thrilled. He thought her eyes passed across his crotch. It was odd how many woman looked there; if he hadn’t repeatedly witnessed it, he wouldn’t have believed it.

“You don’t even have a towel.”

He shivered uncontrollably as he pulled on his pants and jacket, using his T-shirt to rub dry his hair. Without his boots she was taller than he was.

“You must be really cold.”

Brad was tilting the bottle, smoking yet another cigarette, still sprawled on their indenture in the sand.

He wondered why she cared. “I wanted to know what it was.”

She laughed. “You better go warm up in the car.”

He nodded and turned. As he walked past Brad he heard him say drunkenly, “You always have to be the fucking hero, don’t you?”

The dawn finally came as they reached Williamstown. Feeling exhausted as if after a trauma, he turned the Biscayne north up Route 7, the road potholed and difficult to read in the flat grayness. Brad snored again, Stephanie seemed listless and bored. Outside Brad’s apartment, after they left him staggering through his doorway, she asked if he could drop her at the dorms. When they arrived, she didn’t get out of the car. He watched the sky fill with pastel behind the dorm buildings, each with a single light over the doorway.

“You’re different than I thought,” she said, her glance intent.

“Just different. At first you seemed so angry and difficult. I bet you’ve got a really sweet side.”

He was confused but too tired to figure it out where she was headed. Her hand began moving across the seat toward him like a spider. Then he thought he knew. “Brad’s going to get me into the school,” he said, reminding her of her boyfriend.

Her fingers were touching his thigh now. The touch made him shiver again; he’d never really warmed up after the swim. Her hand found his penis through the cloth.

Her hand jerked back and she laughed, her head tilted back against the bench seat. “You really think so?”

3 thoughts on “A Chapter From CLIP Now Available from Amazon”