A young man walks along a road, and beside him walks his many long hitchhike trips like cousins. They are not me, but they are my family, my support, my back. 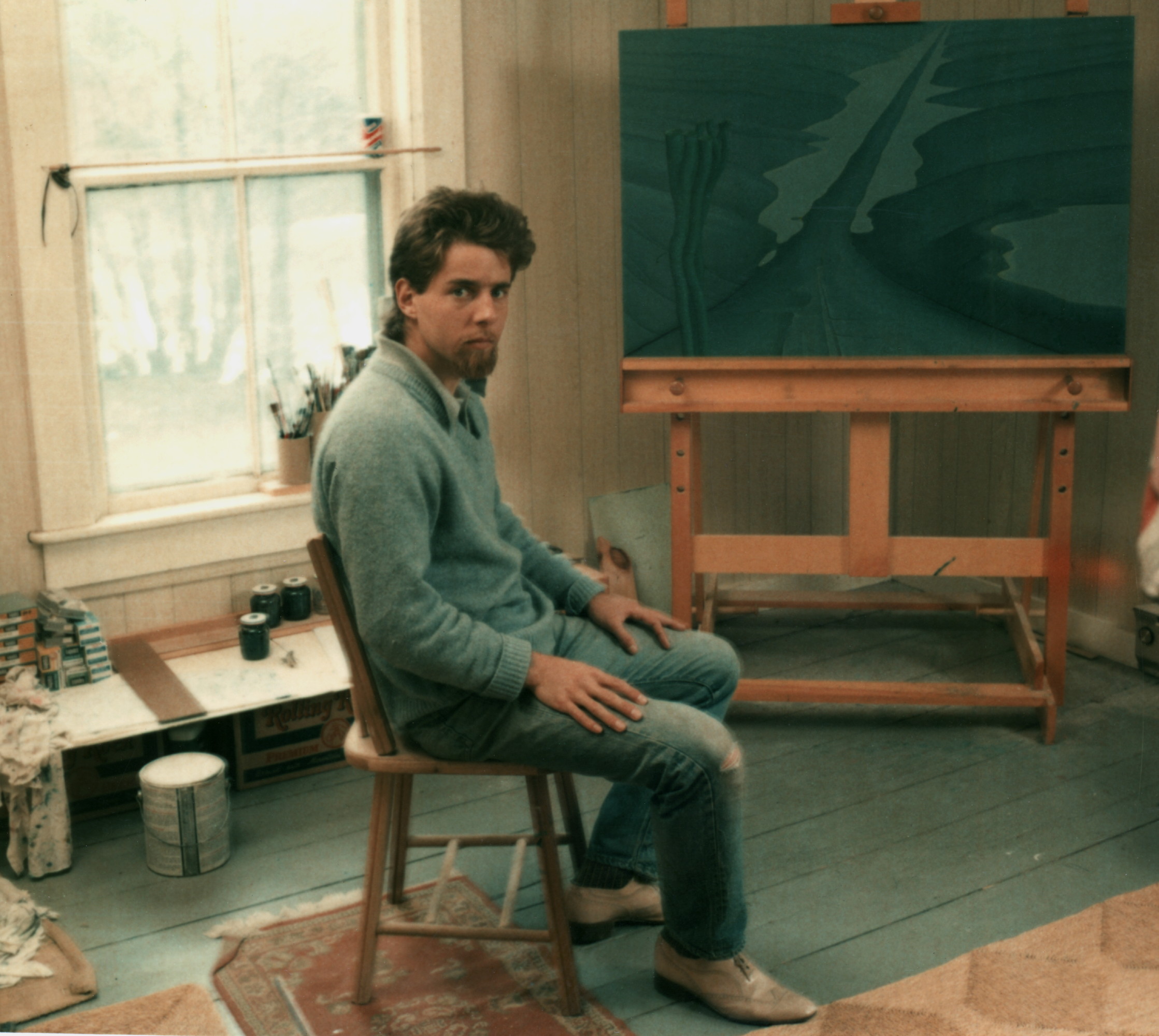 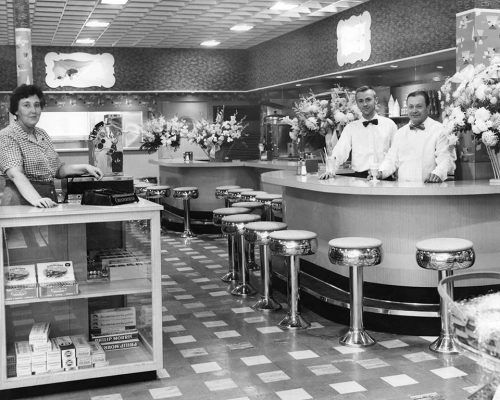 I remember walking into Ray’s lunchroom,

The long, curved counter and the red padded stools,

And you, so young and fresh on my arm;

We left the spring rain outside.

It was all too long ago,

And I’m tired, and my love is a withered husk.

And I can still smell the soft breeze

As we walked out of Ray’s lunchroom

And headed back to your bed:

Back to the smell of you

That matched the wet air for sweetness.

I rage at this winter darkness

I rage at this winter emptiness

I rage at this winter loneliness.

“I hitchhiked 22,000 miles, about seven times across the nation.” I used to be proud of that number because I felt they were true road miles. This meant that I simply set out in a direction, and though there might have been a vague destination, the whole reason was to be on the road, not to arrive anywhere particular. In other words, I wasn’t commuting; I was out there for the coarse poetry of the thing.

In 1973 I sewed together a leather rucksack patterned after a worn-out canvas one retired by my father. I salvaged the simple T-frame and all the metal bits—stitched, awled, punched holes for rawhide lacing. At the time everyone thought I was nuts. “That’ll be way too heavy,” they said. I carried that pack with my Coleman stove, canteen, coffee maker, wool GI blanket, rain tarp, journals, sketchbooks, and so on for many miles. As it turned out, a leather pack wasn’t such a bad idea.

My first major hitchhike was from Wisconsin to the Maine Coast and back when I was 16. I can remember many of the rides that summer, can still see the faces and hear the conversations. I even slept one night just south of the Lincolnville ferry landing on the beach and reached the Belfast waterfront the next morning.

The tester from that 2,000 mile run was a 23 hour wait in Sudbury, Ontario, the nickel capital of the world, which approximated a gasoline alley appendaged to the lunar surface. After 23 hours, walking backwards for about 20 miles through the barren gray rockscape with my thumb held high, I figured I’d achieved invisibility, not usually accessible to most 16 year olds. In desperation I finally waved down a Greyhound bus, which, much to my disbelief, actually stopped. Turns out the radio had been airing bulletins about escaped convicts.

At the bus station at Sault Saint Marie, I bragged about my endless wait, insisting in my youthful arrogance that it must be a record. Another traveler shook his head, his face obviously related to the walnut. “Let me tell ya, I heard of a fellow got stranded in northern Canada on Route 117. He waited day after day for a ride, taking a coffee and sandwich every so often from the diner near the edge of town. A week went by. There were no buses, no taxis, about a car every hour or two. Eventually,” he paused for the punch line, “the fellow ended up marrying the waitress at the diner and never left. That’s the longest as I know it.”

One ride from the late 1970s stands out.  That spring I hadn’t been drinking because of stomach ulcers; the long winter had me fairly pent up, and I needed to get away from the snow. So I headed southward, from northern Vermont to New Bedford, MA. I was standing in a shallow valley on Interstate 195 when a car careened almost airborne over the rise and began to shoot past me in a blur of angry noise. Suddenly—full brakes, tire squeal, a monstrous fake-wood-paneled wagon fishtailing to a smoky, dusty silence. Then the fishtailing began in reverse until the vehicle was along side.

I hopped into the backseat. The driver, mullet haircut, broken nose, T-shirt though it wasn’t much above freezing, turned to me. “Damn, buddy, that was lucky. We almost didn’t see ya.” With that he jammed the accelerator and didn’t release the tension until the battered wagon was bellowing down the highway at nearly ninety-five. It took me a moment to understand what he meant by his greeting. At first I thought it had to do with not running me over; then I realized it was about the impossibility of not picking me up, a generous attitude that immediately intrigued me.

As I was figuring this out, the co-pilot, ball cap backwards, about six molars and an eye tooth, another T-shirt, handed me a beer. The way he handed it to me without asking, I couldn’t turn it down. Bizarrely it was a Krakus ale imported from Poland. “They was on special. Freakin’ gets you there though.” It tasted wonderful and hoppy after the months without.

“Sorry about the cold,” the driver yelled above the racket. “Exhaust was killing us.” The hammering of the broken muffler, the 90 mile-an-hour wind pouring through the rolled-down windows, and the radio at volume made yelling imperative.

It was about ten minutes later that something snapped and the muffler hit the pavement. I’m sure sparks must’ve been spraying from the stern like a firework. A quick stop ensued while Molars wrenched off the culprit and tossed the entire unit attached to about eight feet of serpentine pipe into the ditch. Back to full tempo, the engine now thundering with a Nascar soul, Molars began to flick delicate almost feminine downward karate chops in the direction of the windshield. It took me a moment to understand this as well, Molars grinning back at me as he admired the effect, giggling with delight. He’d cut his hand during the modification and was painting lines of blood on the inside of the glass and the dash.

While Molars had implemented the car repair, the driver and I had chatted, opened another Krakus. They were fishermen about to ship out in a few hours. Whatever I offered the conversation made the driver grin and nod as if I had nothing but mainline wisdom; we seemed to agree on everything. When we were back at blazing speed, Otis Redding’s “Sittin’ on the Dock of the Bay” came over the tinny radio, distorted by the maximum volume. They both started singing, really putting their hearts into the whistling section. I’ve rarely met two more content guys.

Here’s the kicker to the story. During the run to New Bedford we picked up a second hitchhiker, maybe a college kid, nice teeth, trimmed beard, nylon backpack and down parka. As the wagon began to reach altitude again, the new rider glanced nervously at the speedometer, at the driver, then at me. He had turned down the proffered beer. Wrongly assuming I was the sanest, he tried to whisper to me, sitting up straighter and straighter on the seat, eyes locked on the highway ahead, hands clenched. I just smiled. After maybe five minutes he said, “This is my stop! This is it. Right here.” He pointed frantically “Right there. Please!” We let him out in the middle of nowhere.

“What the hell was up with him?” said the driver, seeming concerned for the first time. I shrugged, Molars threw another spray of blood, and we thundered off down the highway.