In August of 1985, I drove Anne Latchis back across the country in her 1965 Rambler American from San Francisco to northern Vermont.  At one point I drove from Denver, Colorado to Waterbury Center, Vermont without stopping except for gas, food, and an occasional swim while going through Canada.  It took 41 hours.  This was all well and good.

What wasn’t, was my determination to coast without touching the brakes from the crest of the Continental Divide until the car coasted to a stop.  I had been practicing the same thing in the same car the summer before on minor slopes, but this monstrous coast obsession was based on my feeling that I could outdrive Kerouac’s hero Dean.  Somewhere I had read that Neal Cassady had done such coasts, and since Denver was his hometown . . . I recently telephoned and apologized to Anne, the owner of the Rambler.  I still feel bad about what I did because it was truly stupid and dangerous even if it makes for entertaining reading. 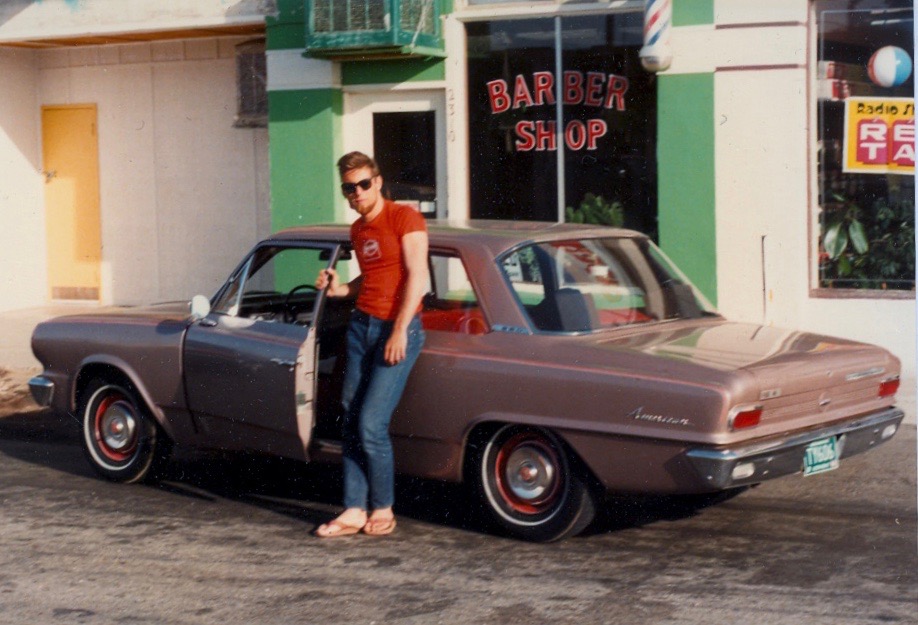 The Rambler in Death Valley, 1984.  Notice the Vermont plates.

The scene as fictionalized in my unpublished novel A Repair Manual for New England Melancholias:

By afternoon, they began the ascent to Loveland Pass. The tank was full of high test in hopes that the extra octane might trick the car into false youth for the climb. It strained along just as bluely as always. The car wasn’t much, but it was consistent. The landscape, however, changed again. The scrawny sagebrush was replaced by forests of pine, fir, and balsam. She added to their dashboard altar a contribution from above ten thousand feet, the smell expanding in the sunshine trapped by the windshield.

At the final apex of the climb, the car was whining in first gear. He almost expected it to start gasping. The embarrassing smoke screen drifted behind them like coal smoke from the stack of a Mount Washington Cog steam engine. They finally entered the black orifice of the Eisenhower Tunnel, the summit of Tenderfoot Mountain towering above them. She leaned out of the window and looked up as they ducked under the massive lip of the concrete portal.

“We did it! We crossed the Continental Divide.” She settled back onto the bench. “I was listening to the engine carefully. I wasn’t sure we were gonna make it. You’re very considerate of the car, Neal. I appreciate that.”

“You’ve got to caress it, feel it through your hands and feet, be sensitive to it.”

He blushed. He’d forgotten about her sexual taunts.

She reached over and rubbed his shoulder. “Maybe we should get a motel room tonight? I’ll pay. Don’t answer, just think about it.”

He stuck the car in neutral, and they started to coast downhill over four freshly paved lanes, the new tar like black velvet. As always, it was a relief to be rolling again, not grinding like a damaged eggbeater. As they gradually gained momentum, he couldn’t help but think about her offer. He imagined her in a motel room slowly undressing, reaching around to unhook her bra. She smiled as if she could read his mind. Right then he made a deal with himself. He knew it was crazy, but he made it anyway.

They passed one or two of the cars that had honked angrily at them earlier. On every grade approaching the summit, he had periodically pulled over to let cars pass if there was a line, but people were still impatient and rude. Some of it probably had to do with the oily smoke, but what could he do about it? Now there wasn’t any smoke from the back. Not a wisp. The speedometer needle nudged past sixty, which was unusual, just as it felt dreamlike to be actually keeping up with the traffic. A kid who had shot them the bird from the back of his family’s station wagon on the way up pointed, astonished, as they passed. Neal daggered a tongue at him.

At seventy, the Rambler began to shudder but only slightly. They were vibrating when he reached seventy-five. Not a lot of vibration, but enough so that the sage and evergreen on the dash had begun to quiver and dance. Soon all the traffic was being reeled in. She glanced over at him, her complacent smile tugging downwards at the edges. Her eyes grew wider as she stared ahead at the highway. Trucks were screeching as they applied their brakes, other motorists meandered along, but everyone was spread out over the four smooth lanes so it was without difficulty that he coasted between and around them.

Eighty. He stopped thinking about Pam stripping. He stopped gloating and looking at the other vehicles; they’d begun to blur anyway. All his concentration was needed for the road. Had the Rambler ever gone this fast before? Would the tires survive? He’d stupidly forgotten about them. A blowout at this speed would be bad. Very bad. He darted a nervous glance at her: eyes even wider, mouth frozen as she searched his face. He ignored her. He had to.

Eighty-five. The car was shivering and trembling, but still controllable. It was having an orgasm but knew that the parents were home. He grinned, mad pleasure pulsing through his veins. Revenge! He would pass them all. All the expensive late-model cars, all the arrogant motorists with their damn tailgating, horn-blowing mentality.

Ninety. The Rambler didn’t care who was around. It could no longer contain its excitement. Like a puppy who’s been forsaken for the day and then hears its master come home, the car was jumping all over the road, rattling unrestrainedly. He started to sweat. Pam—eyes wild, white knuckles gripping the dash and the doorframe. And then, a quarter of a mile ahead, dense traffic caused by a pair of trucks side by side with a camper and a station wagon beside them in the remaining two lanes. All four lanes blocked! He hadn’t considered that. He couldn’t believe it. What the hell was wrong with those drivers? Didn’t they realize what was at stake? They should look in their rearview mirrors for Christsakes! A missile was bearing down on them, the fools. Did they want to die?

His brow itched as the sweat started to pour, his hands locked on the wheel as it jerked violently, possessed. She let out a chirp of high-pressure steam that sounded vaguely like Neal. His foot lifted and inched for the brake pedal. A mind of its own. He secured his foot back on the mat. He’d made his deal, he’d made his deal. But all four lanes were still blocked, and the Rambler was closing ridiculously fast. Shit, a slot had to open up, but if anything, the traffic was more plugged. It was too late for brakes. He could never get the car with its worn drums slowed in time. His brain flashed a message: Idiot! You fucking idiot! He’d finally done it this time.

Then, he saw something. He hopped the vibrating nose toward the breakdown lane, aimed for the gap between a semi and the guardrail—a metal gauntlet of death. It was like trying to coerce a sprinting bronco to cross a chasm on a greased log.

Ninety-five. She screamed. Loud. He barely heard it. Wuuuhh! Blinders of bright steel and spinning rubber within inches of the Rambler’s flanks, and then, in less than a second, they were free, their pounding hearts and a cloud of dust the only testament. Before them—clear lanes, nary a vehicle. A gorgeous sight. The grade lessened. The speedometer needle sighed. The Rambler fell into post-coital melancholy. He thought of the Eldorado. It wouldn’t have fit through the gap.

She glared at him, lips still parted. “Neal!” It sounded as if she had never spoken his name and was unsure of the pronunciation.

“What?” He was as deadpan as possible.

“What were you doing?” She sounded pretty dangerous.

“WHAT THE FUCK WERE YOU DOING?”

“I didn’t want to touch the brakes.”

“You didn’t want to touch the brakes?”

He shook his head.

“If I didn’t touch the brakes my luck would change.”

She started to laugh hysterically. At first he was worried—she really sounded a bit crazy—but then he started laughing too. He’d never felt so excited, and he’d only told her the first part of his deal. 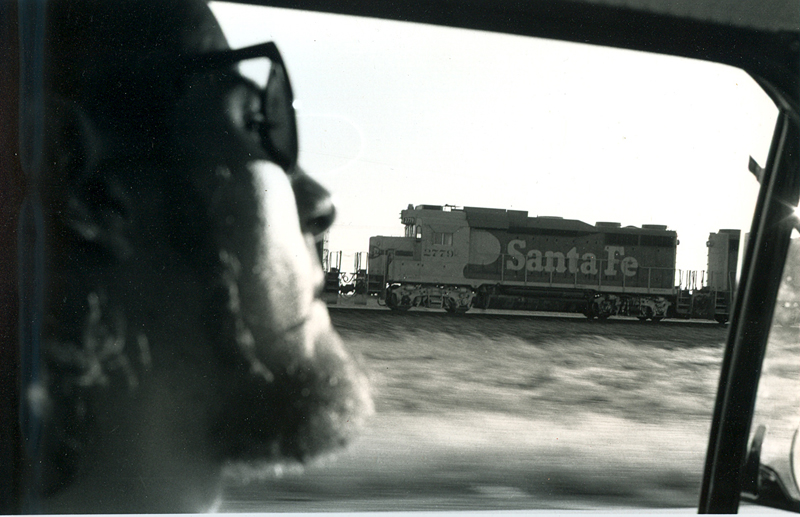 Both photographs by Anne Latchis, this from the drive across in 1985.