This tartan plaid was created by my wife Amanda, and QC is now building the seats.  I’m BEYOND impressed and excited. 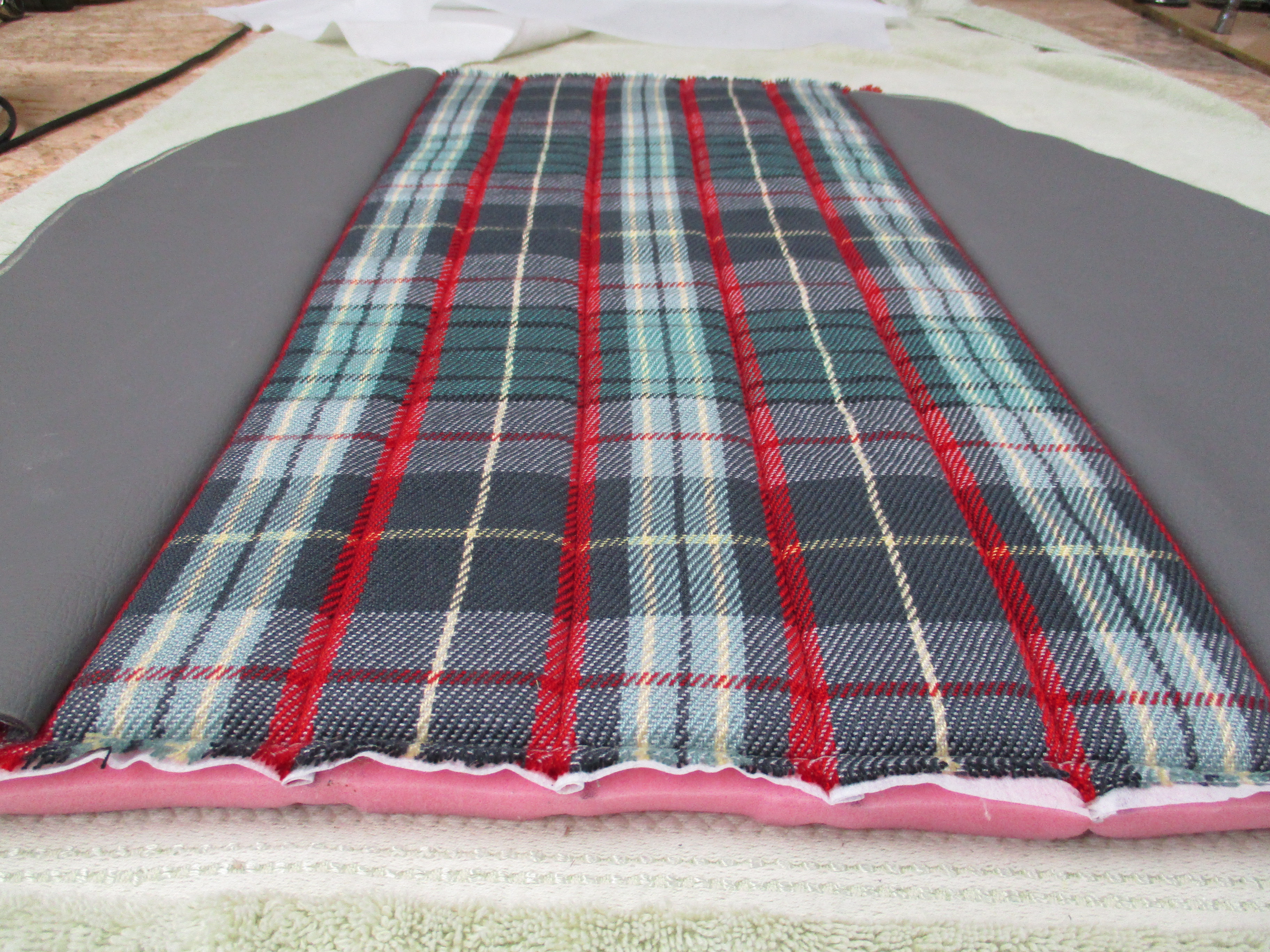 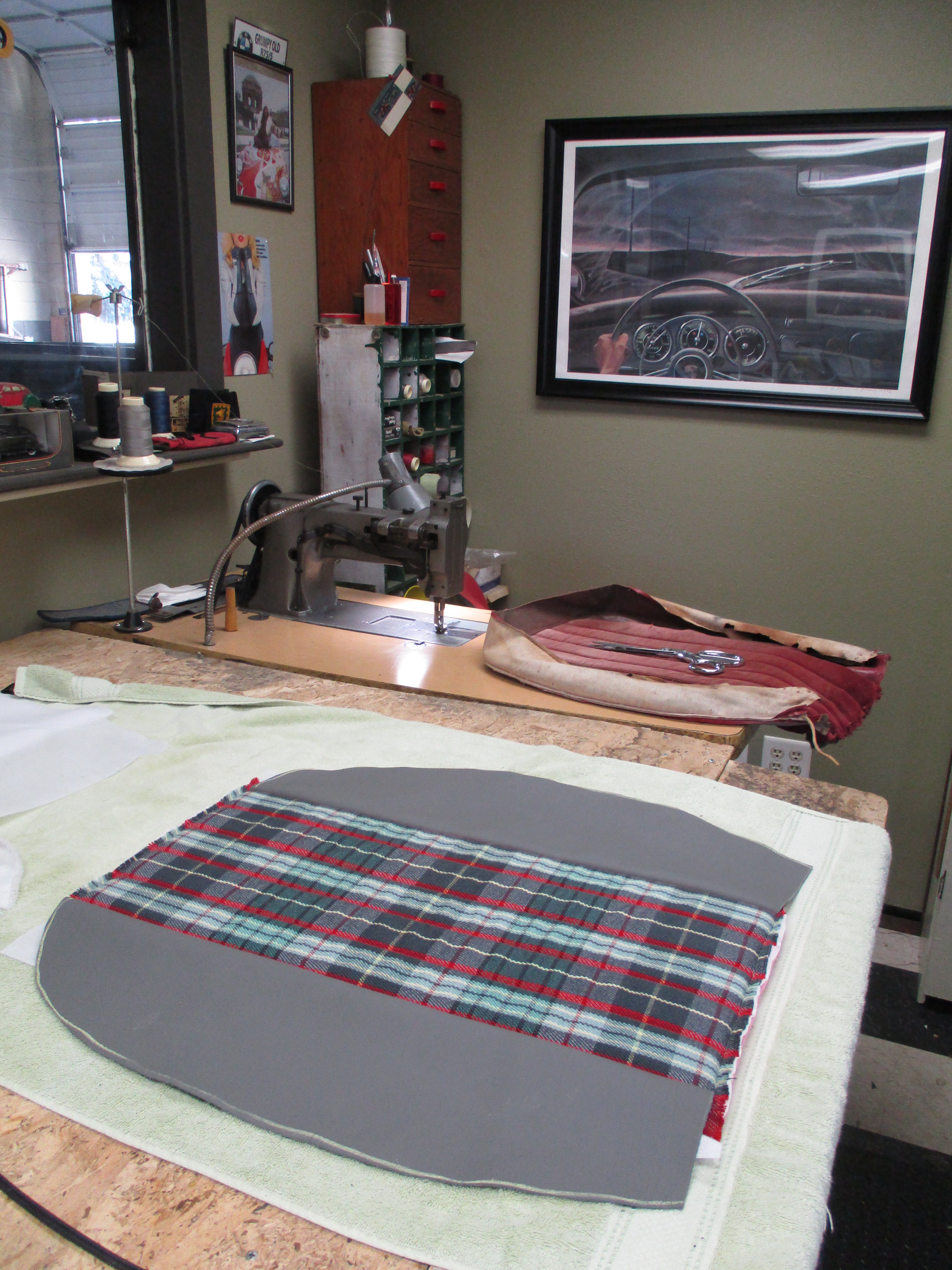 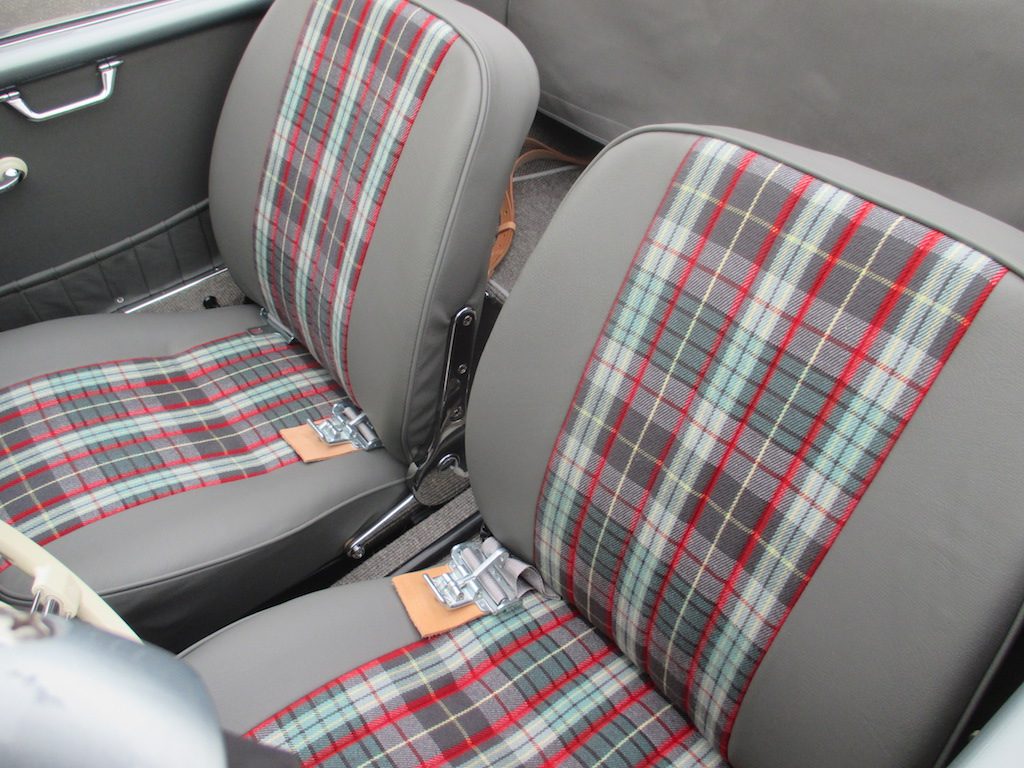 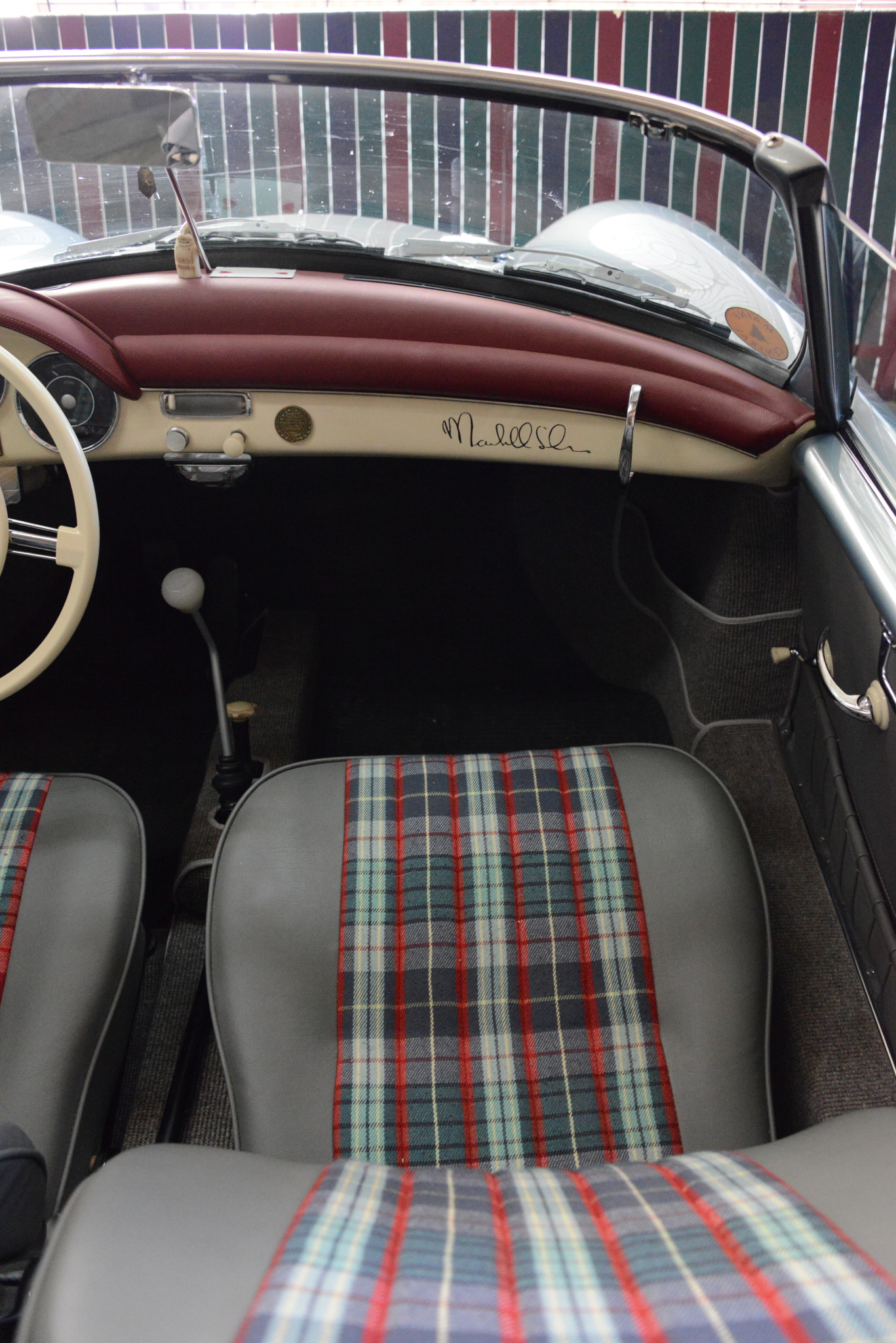 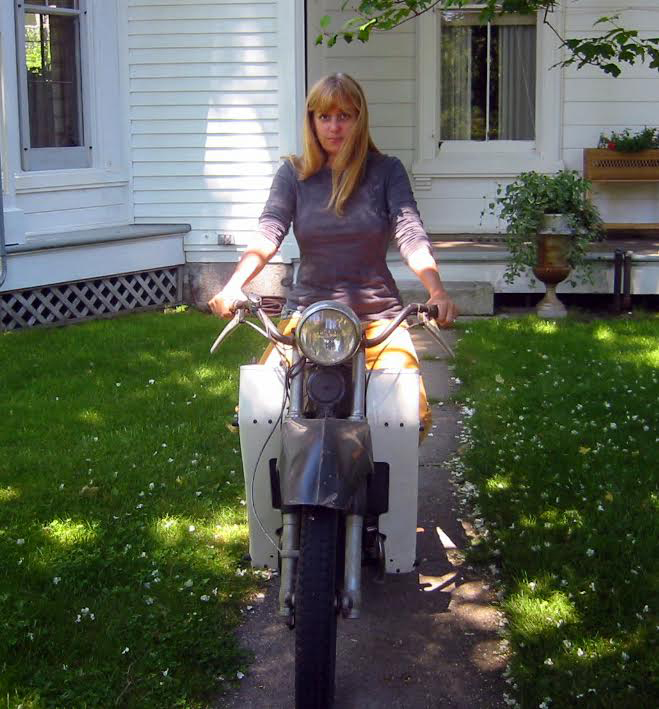 The weaver on a 1950 Velocette in our dooryard. 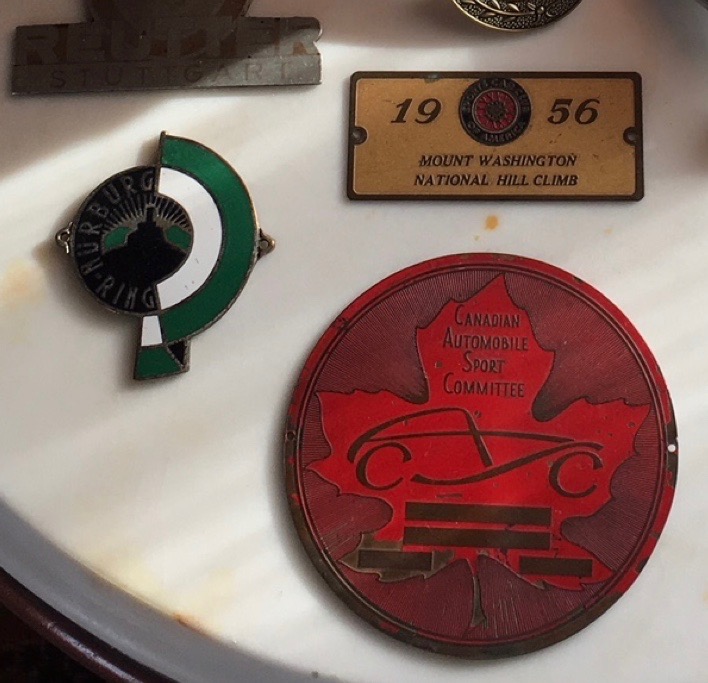 The original prototype badge made and designed by Jack Luck in 1951.  My dad formed the original group with Jim Gunn as secretary.  It would turn into the CASC. 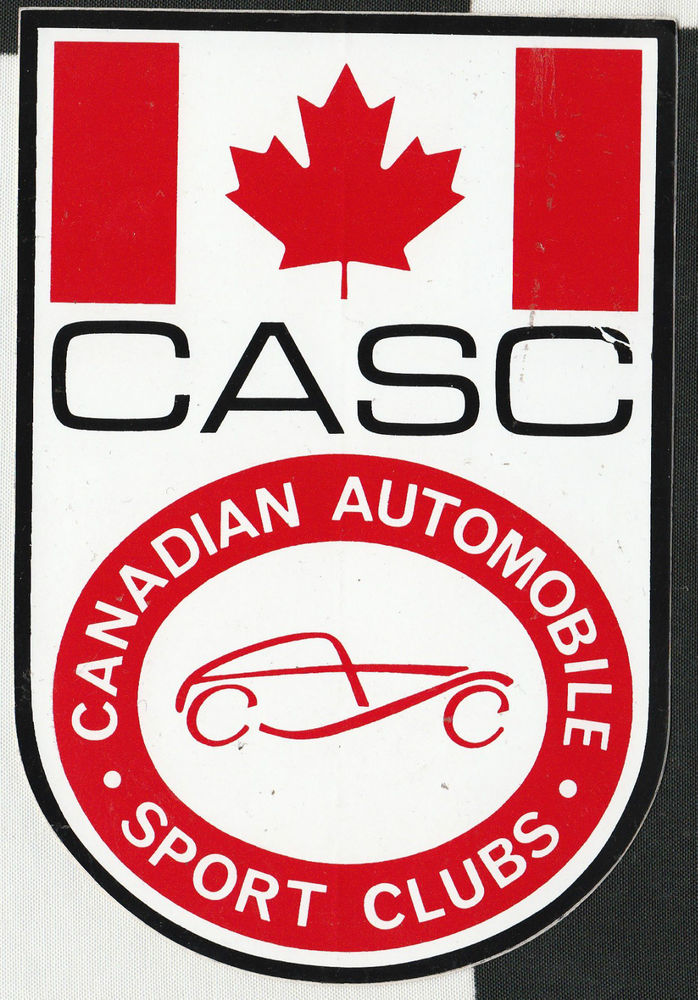 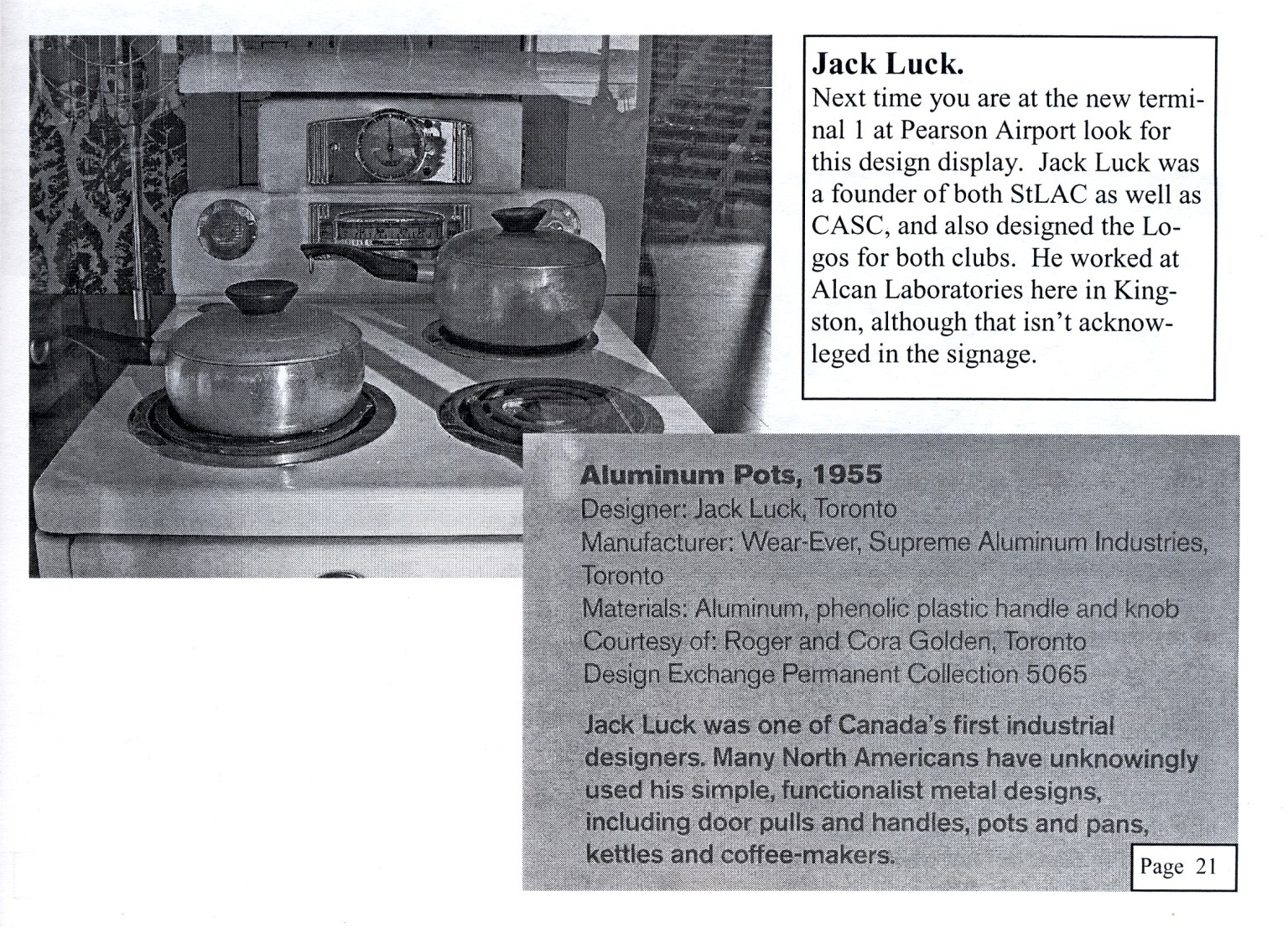 Inspired by Jack Luck, I designed this card for my father at the age of 13 or maybe 14.  Hard to remember actually.  See how the logo reads MGA? 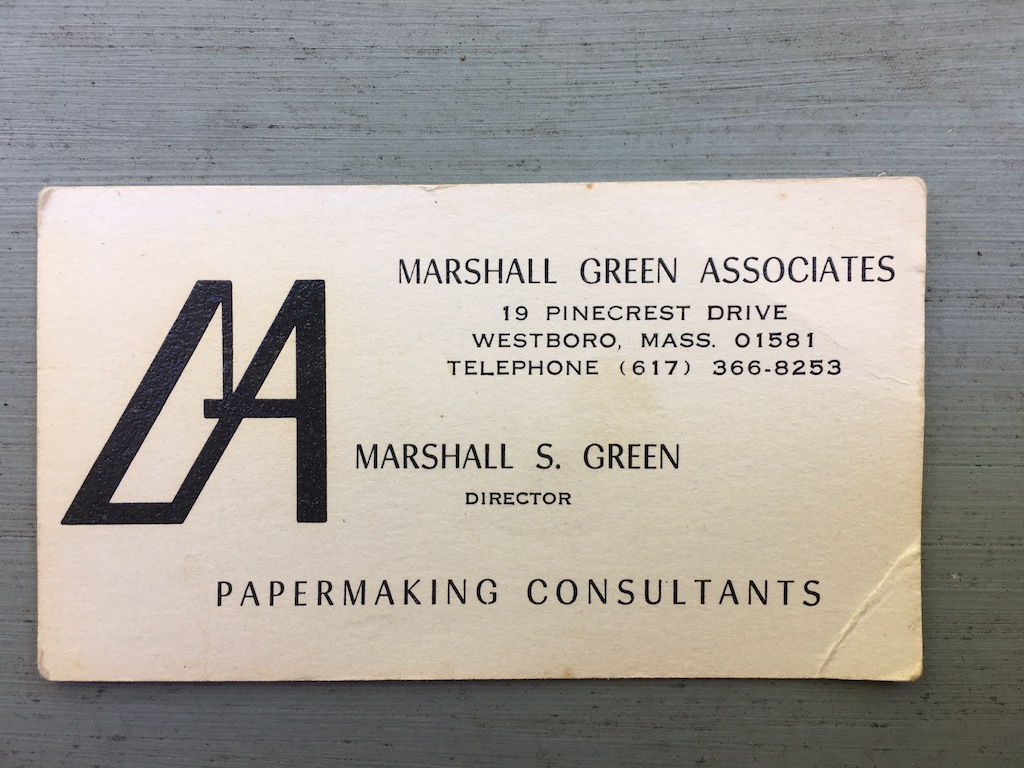 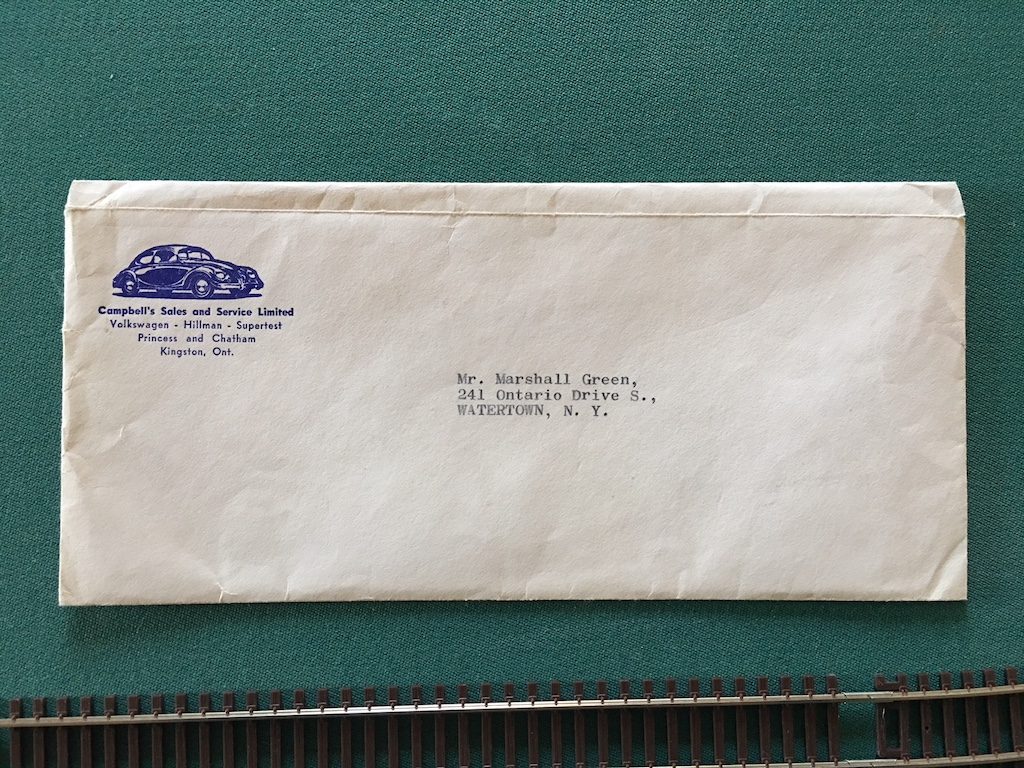 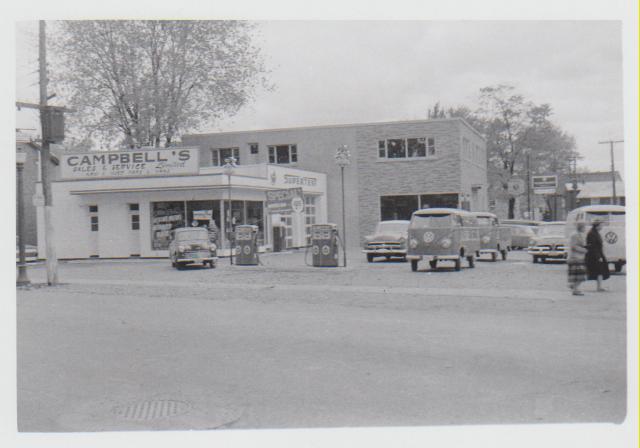 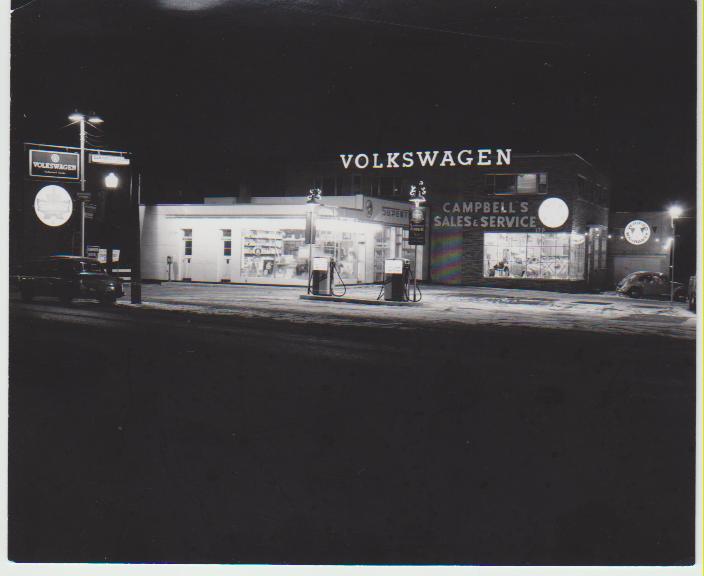 The Porsche VW garage in Kingston, Ontario where my father traded in the 1952 coupe in 1960 and likely ordered his 1961 356B.  Photos used with the kind generosity of Jean Paul Ecke whose father (Gerhard Ecke) was a mechanic at the garage and also owned two wonderful 356s.  Any additional information or photos would be great appreciated. 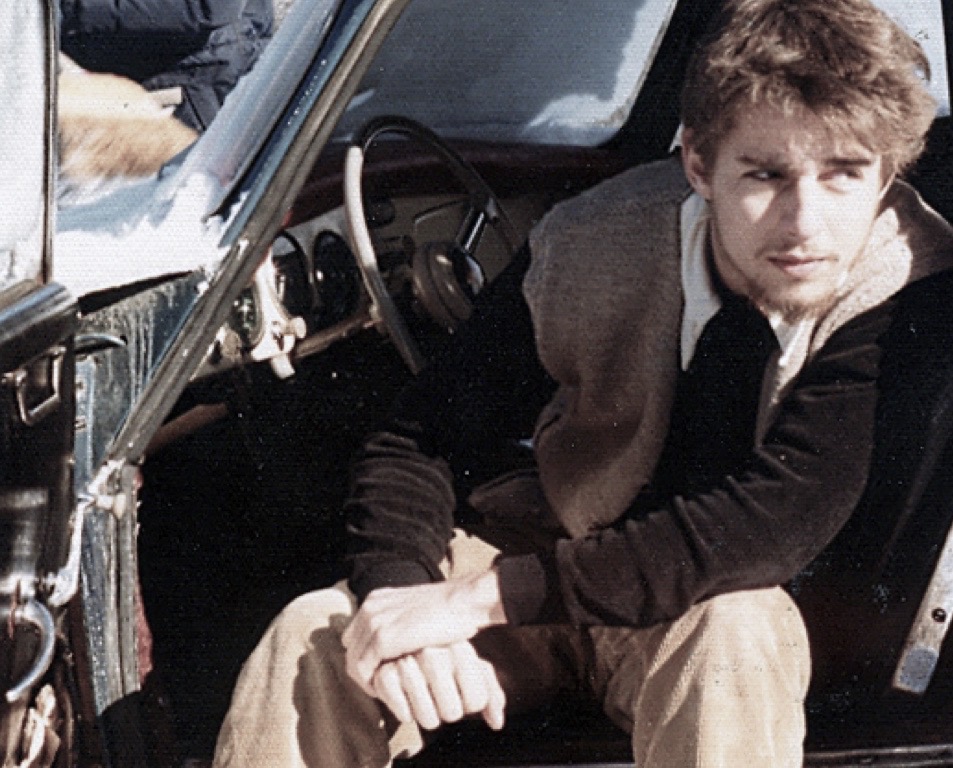 For QC if he will have it

When I charged into that great darkness
As a young man, I truly believed everyone cared.
I held that hard thin wheel with such firmness
And even more belief. CHARGED toward whatever
Void could be presented. By God, it was a
Contest of wits, and win or lose,
All I cared about was how
Well I played.

Something in us always turns back to
Look at the setting sun or to embrace that
Bluing of dawn. Has nothing to do with not
Loving the night. The night is off time. No
Pressure, no expectations, we can let it run out
Reluctantly like an iced cooler in the desert.

And no real man drinks warm beer, although
I did once. Kangamangus Highway: “Say it!”
Then drive it on a January night under an APB.
These are the unspoken facts of heroic lives.
This is not the flickering of Hollywood stars
This is us, and we only do it for one thing:
GOD.
Believe it or not.

It takes 18 minutes to chill a warm beer in
Ice. You can use the bag the ice comes in,
You can use motel vending machines for ice,
Don’t need a room card, any card works fine,
However, holding it out the window at speed
No matter how cold it might be outside the car
Only seems to freeze your hand before the beer.
Chill rivers and the Atlantic do not cut it, no idea
What Hemingway was talking about. Maybe wine
Does not need to be that cold to be good on a hot
Day. But you either drink grain or grapes and the
Irish do better with grain. Ever met an Irish wino?

These are things I care about because systems make
Life easier. And when you are a devil fighter you need
Strength, endurance and cleverness to last any distance.

In the mid-1980s I drove 41 hours without stopping. But
As the grumpy woman I rescued will tell you, “You slept for
About an hour.” And she is correct, at dawn in Ontario
I did close my eyes for twenty minutes. Yet Denver to
Northern Vermont with only a short break felt like a record to
Me. I was proud of that. I was proud that I went all the way to
California to rescue her, although we were only just friends.
But she asked me, and I went because she asked me. I drove her
Rambler across the country as she felt she couldn’t make it alone.
Did she ever thank me? Did she reciprocate for my effort?  Although
I paid every one of my expenses, she still argued about money.
But now I know I didn’t do it for her.
I did it for the poetry of doing it,
Which again is GOD.
GOD is aesthetics.
GOD is trying the impossible.
GOD is the poetry of belief.
GOD is Travis wailing up
Mount Washington in 5 minutes and 45 seconds.
If he thought about it,
He could not do it.
I know this and I’m sure he does too.
As Nicky said: “If you think,
By then it is too late.”

When I draw, if I become too
Conscious, I get nervous
And then must quit.
Colored pencil will not
Erase, so each mark
Remains. Each mark
Is a testament of
My belief.

Though they have EVERY advantage, the
Wealthy and powerful rarely write great
Novels or paint great pictures or make
Wonderful objects of grace and beauty,
Invent the things that improve the world.
Instead they keep destroying everything they can
In the false name of their self-serving propaganda.
When they say God they mean the DEVIL.
And this is as it is, for our lives are not for
Convenience or safety or luxury or ease.
We are here to understand and be tested,
For in death we will KNOW fully what
We have done and who we were
In Her eyes, and She is as
Tough as they come.
Imagine sparring the
Devil for eternity.
So I can only pity
Those who are in such denial
And such deep unhappiness.
Because if you are really wealthy
You will never know who loves you,
And maybe that is why they have
Turned away from love into
Blind greed, the endless
More.

And I will hold the hard thin wheel again,
I will charge across my country again,
Now I am free from worry about
Others. I know who loves me,
And that knowledge transcends
Everything Earthly. 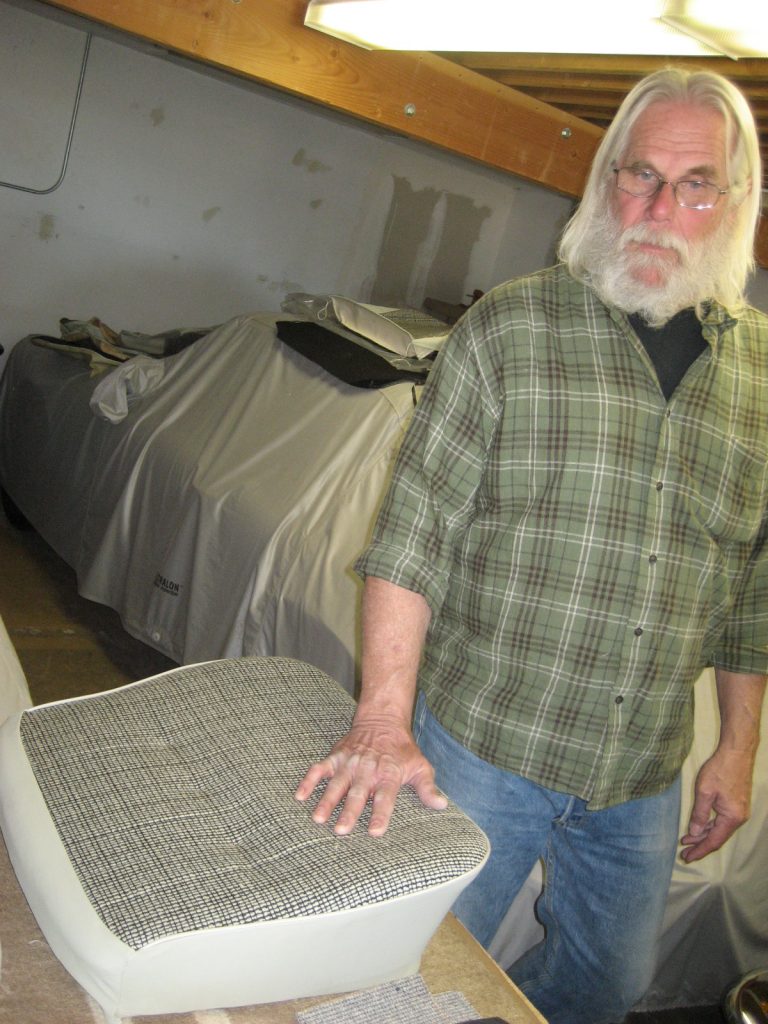 The Q and a VW seat. 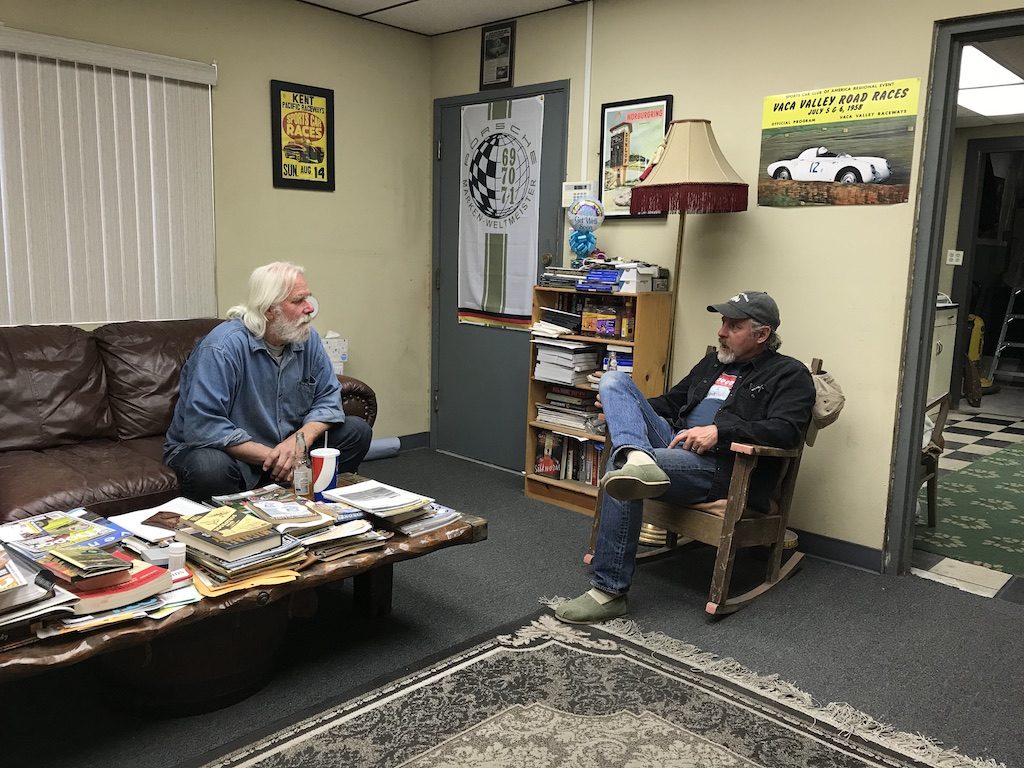 QC and EG talk sports cars and the meaning of everything way into the early hours before the dawn.  Ventura, California, 2018.

Amazing to be around the legend and mix within the hub of intense rare car restoration and fabrication.  Such an assembly of brilliant workers will likely never happen again.  Imagine fabricating a Porsche 550 from aluminum and steel completely by hand.  Mind-bending!  My father would’ve ben so at home for once in his life.