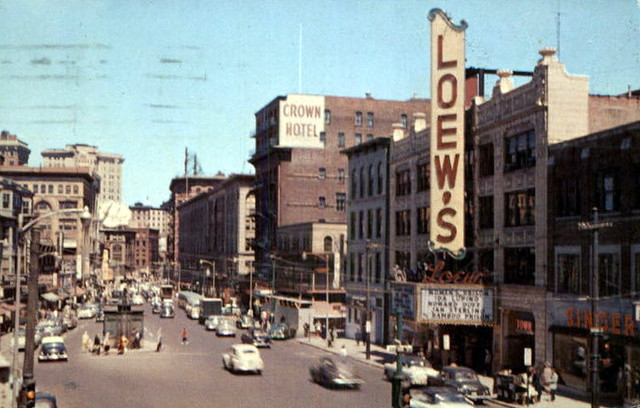 The street in Providence, Rhode Island where I blasted my blue 356, that wonderful exhaust echoing.  Duke’s Billiards—I lived above it for a few months—would’ve been on the left, the Greek diner with the generous 25-cent soup was to the right of the movie palace, which was called the Ocean in 1974.

Kris and I dropped straight down through Vermont to Hal Stowell’s cabin.  Hal was my tremendous hero through this era, and of course he had magically appeared after Andi Shapiro kicked me out the winter before.  I’ve never told the truth about why Andrea Shapiro kicked me out, but I suppose there is no reason to hold back now.

Her obsession with me was because of the book The Little Prince, which was her great childhood favorite, and I still have her copy that she gave me sandwiched on a low dark shelf in the library of our house, her name written in childish huge letters.  When she saw me that evening at the RISD I was wearing a self-designed handmade suit of pale yellow cotton duck. It was cooler-looking than anything Richard Merkin ever wore, believe me.  I had traded Betsy Carlson a painting since she was a talented seamstress.  Andi introduced herself, and after I left the college the next morning, we began to correspond.  Then, I hitchhiked that winter in 1974 to visit her at her beckoning.  [This has all been written about in a former entry.] 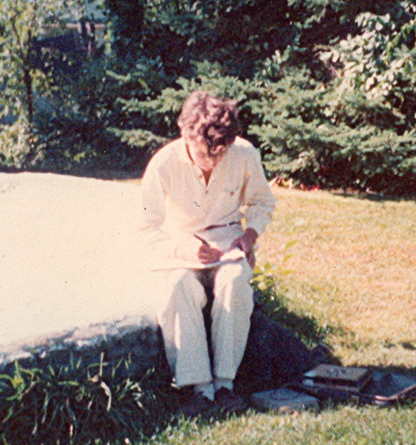 The suit a couple of months old in 1973, Gorham, New Hampshire, the author writing!  The author rarely wore anything except that suit during that era.  Even the belt was pale yellow cotton duck and thin as a crayon, the buttons including the fly were hand-carved maple.

What I’ve never told about my week with her (and ignored in my poem about her) is that she went to a doctor on Tuesday to have herself fitted with a diaphragm so we could fuck.  During the doctor visit she found out her college painting professor (she was in her final year at RISD and was getting her senior show in painting together) had not only given her an STD and made her pregnant, but he was also flunking her.  Her upset and emotional pain, fury and anger were overwhelming as she was a very upper-class spoiled girl and had never had to deal with anything negative before.  As my roommate for one week recently e-mailed me (and I paraphrase):

“But then I remember you landed this crazy cute rich chick and you still bailed.  The two of you — just can’t imagine her living in the woods when she was hob nabbing with the likes of Dick Cavette the TV guy in NYC swish splendor.  I saw her at various swish soho parties. I always had secondary (not good) thoughts about her although she was an extremely attractive young lady. And had ambitions, whatever they were, way beyond mine.”

I tenderly held and soothed Andi’s sobbing body for a day or so, took her out to eat at fancy joints until I was broke, and then she simply asked me to leave.  I felt an overwhelming emotional attachment (love?) for her because of having shared so much, so quickly, but she never gave me another thought after the lightning struck.  I’m always amazed by people who can be that self-serving and cold.

As a footnote, I tracked Andrea Andi Shapiro down online recently, and actually contacted one of her former husbands—a famous and nice enough guy.  But, ha!  She still refused to have anything to do with me. Her words as they were passed along: “Tell him to FUCK OFF.” Ha, ha, ha. 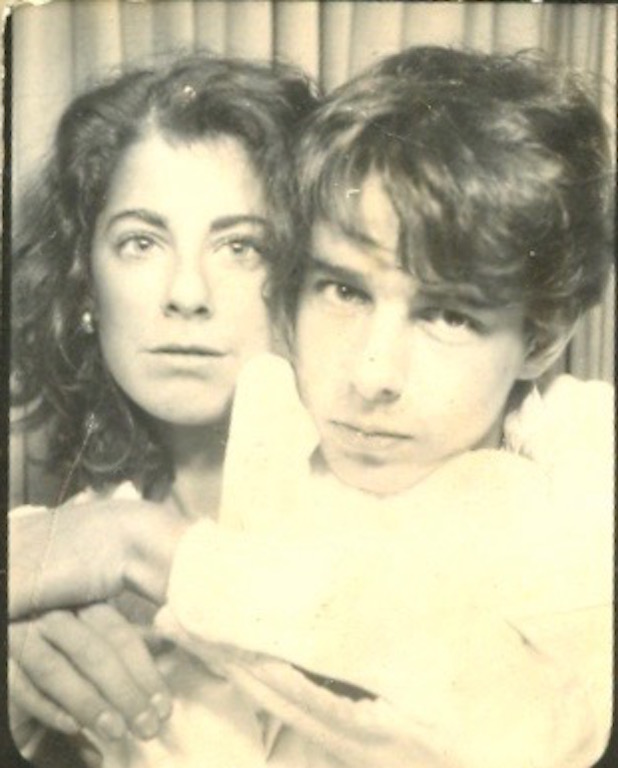 Taken in one of those photo booths that were in train and bus stations. Providence, January, 1974, I was 17 by less than a few weeks, Andrea Shapiro (Andi Shapiro) was 21.  Think of that! 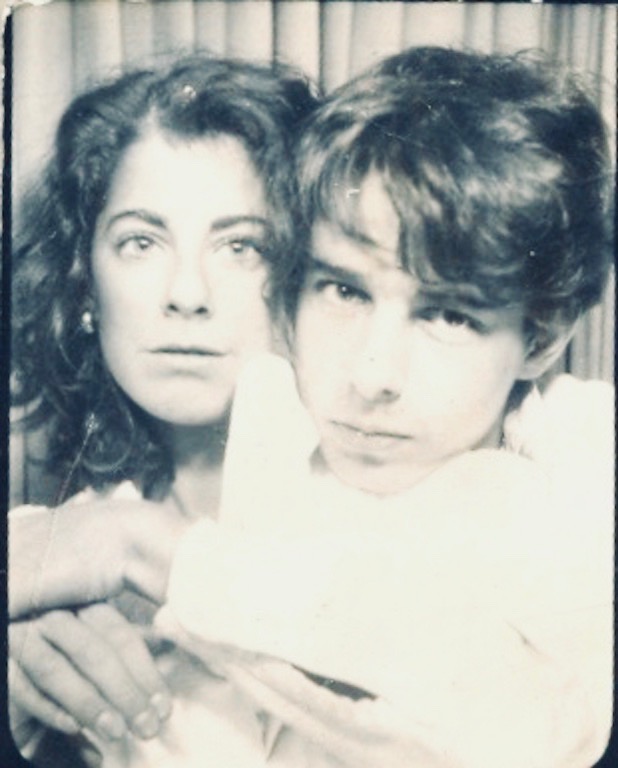 In October 1973 after meeting her in the Cafeteria at RISD.

“I met this girl Andy my last night there. She is very beautiful.”

And that was all.

Then we must have started writing to each other and talking on the phone until I went back to Providence on her beckoning, January 1974. I had turned 17 years old that December.

This gray day bears no blessing. Andi Shapiro calls while I am sleeping. My mother alerts me. I am awoken to Andi’s words. They too carry no blessing. Such is weather and city women.

I guess I loved her—now I only have Casablanca on the brain. I see no further time between us, the one day we met, the one week at her side, the only memory. I so remember her asking me if I wanted her to take my penis in her mouth. That Sunday morning—The city sounds in my ears through the open window since the steam heat was overly warm, finally fully awake after my long two-day hitchhike from Wisconsin, my aimless walk around her city in the cold, trying desperately to find her damn apartment before I froze to death.

Then, I had actually forgotten what she looked like. Now, her face and body are etched into my vision. A raw girl—yet so confused and swallowed up by the system. Such a creature of both pain and beauty.

I finally found the apartment and hammered on her door. Nothing. So I curled up on the landing in my sleeping bag and slept. I awoke to her long black leather boots as they hastened, clacking up the three flights of stairs at 2 a.m. I stood, still so exhausted, only partially awake, feeling so crazy after days and nights on the road. And there she was—raven hair embracing her finely featured pale face. We embraced and then she invited me into her small place—huge boxspring and mattress on the floor with brown velvet sheets still unmade. My come made stains on those sheets in the days to follow, but then I showered in the tiny bathroom, the shower in the 4-foot tub, and I fell asleep at her side only to awaken a couple of hours later just before dawn. And there she was watching me. Andi Shapiro. We went out to eat every night, to a Chinese place at least three times, where she formed small penises in the coconut ice cream and then hooking my eyes, she licked them away. 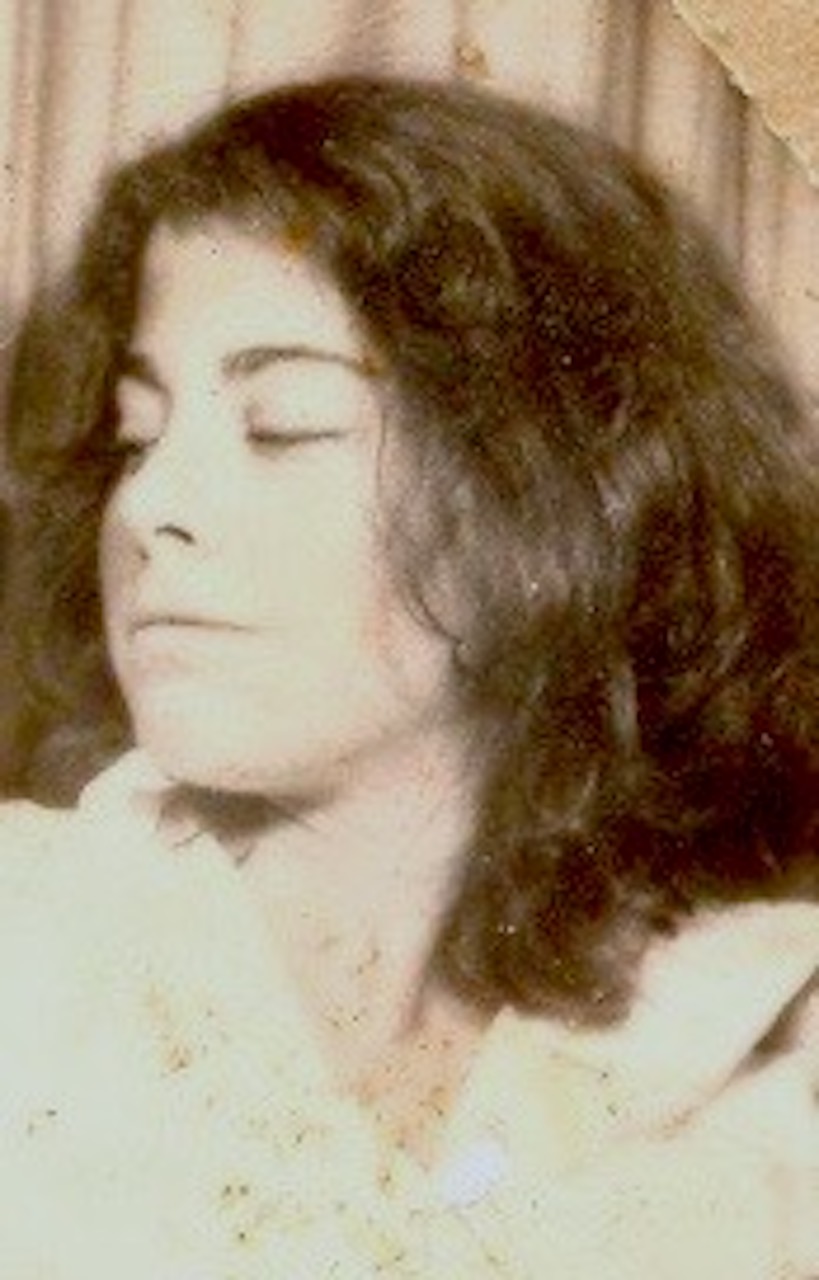 Andrea Gene Shapiro looks at Eric Marshall Green in a photo booth in 1974. I wonder what she was thinking? I know what I was thinking. 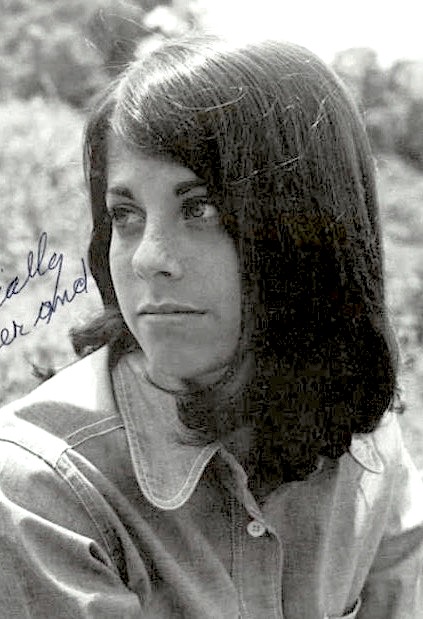 I must have written this poem for her at the beginning of the week.

Who has heard the morning scream in sunlight?
Sure—these are weighty moments!
Were there really church bells ringing?
All I heard were loud lips
And a slow movement
Like a low note from her body;
All is one when Sunday’s pigeons and city
Live beyond the window.

I heard only one sound:
A sound one warm body breathes into another
The morning after a long vigil.
Someone called my name in ecstasy
A one-syllable song.

I wrote this poem in March of 1974 while I was staying at Hal Stowell’s cabin in Massachusetts. I was, of course, 17 years old then.

You, who sits in other poet’s cabins,
Noon stew five hours worse; I hear you
breathing your thoughts out the chimney.
At least you fed the cat and blew your nose:
Each ran.

Did you watch the sun fall into far-off trees?
Last light settling quietly in pine needles?
I saw you at the dusty window wondering
What could be done with such wonders.
Last night you wrote letters,
The days before you were traveling.
Did you find any peace in all those moments?

Last night, lying awake like a fish on dry sand
What was your pain?
Did the cat sleep on your head?
Was it the creeping cold that made your throat tight?
Was it the distance between you and yourself?
Or was it this distance: that raven-haired kitten
Who eats your soul and sucks your sex?
I hear that whimpering. No, it isn’t the cat!

You place wood in the stove,
Arrows in your heart,
Splints in your nails,
You sigh when the sun folds,
You pet the cat and she purrs,
You pet life and expect it to purr.
Do you purr when life pets you?
No. You wander off,
Fire in your feet,
When will you ever find your leash?

You say you cannot sour,
You are like water,
Just a wind and you move.

But I wonder. I wonder a lot.

Shall I too lay my wages on your gamble,
Your endless movement, your uncertain destiny?
Yes, I too am alive!
But I need more than dreams to survive.
You steal only from yourself and the moment,
Yet you are a thief and have a thief’s eyes.
Do you ever find yourself with anything
You really need or actually want?
Or is it about the excitement of the theft?

Maybe we could be friends, you and I?
You devour the moments,
The failing last light,
And the raven-haired kittens.
I will eat only bread
And drink only water.
You ride the winds
With the birds,
Turning in the last light.
I shall not mar a single dream.
I will be sustenance,
You will be flight. 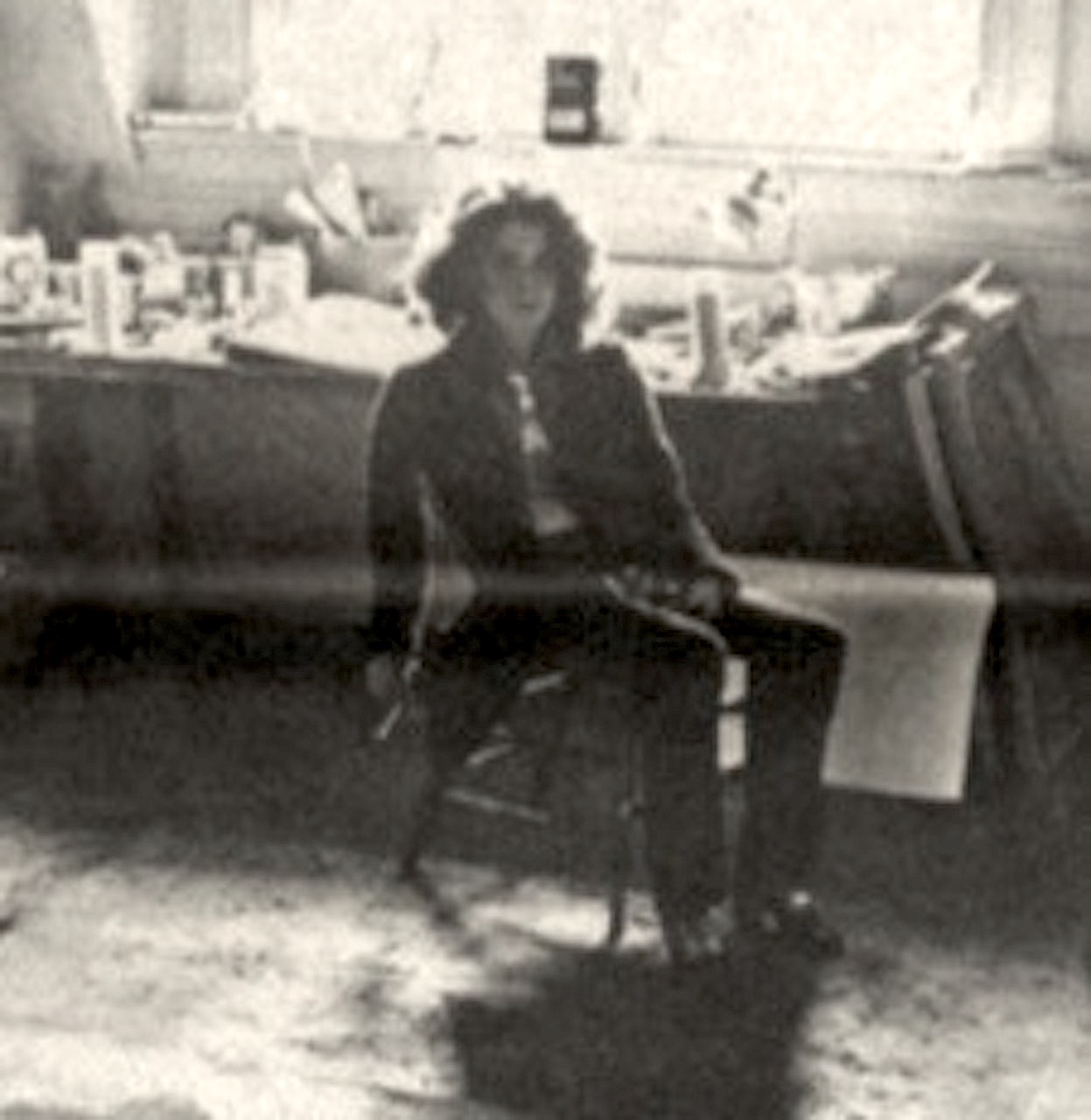 Andi Shapiro in the RISD painting studio in 1974. Photo by Roger Gordy.

SHE
for Andi Shapiro

She who stood before me naked;
“Isn’t my body perfect,”
She’d say and it was.
She in her last year of art school,
The girl I hitchhiked a thousand miles
To see when I was seventeen.
Before I left I had inspected my face,
I had a few issues, an uncertain complexion,
Maybe I should wait a month or two
Till my skin cleared;
She so doll-like and blemish-free
from upscale Chappaqua, New York.
I hitchhiked a thousand miles in winter
With my pool cue and my freight-riding sack
Packed inside with handmade gifts for her,
Things I had labored over.

“I wish you had a sports car,” she said.
While she was attending painting classes
I’d either be in the freight yard wandering,
Angling my complexion to the January sun,
Or in one of the two poolrooms.
(But how do you win a sports car on a pool table
In Providence, Rhode Island, in 1974?)
She the first to put the mouth to me
And she choked badly in my moment,
Thereafter eyeing it suspiciously.
She who kicked me out after a week,
After my meager money was gone and
The pool balls had stopped dropping.
How can a seventeen-year-old choke
When he is playing for the woman he loves?
She did—I did.

He heard I was around and wounded,
(I’d called his ex-wife looking for him)
And in a decrepit yellow ex-mail van
He found me and offered the Wendell woods,
A tiny cabin chained to a massive pine tree.
No well, a rusted-out wood stove, gas lamps,
The January wind keeping that chain taught.
My complexion cleared right up.

Over frozen rutted dirt roads, there
The lone payphone at Lake Wyola,
The single light above it now,
A small shrine in darkness,
The frozen lake the wind had blown
to white waves in the moonlight,
Black Label pounders between our legs,
Oh, I had to call her,
Damn, I had to call her,
Just had to.

And after the miles of fierce dirt roads
And the coins pressed hard into the slot
And standing there shivering in the
Forever wind of our belief in salvation
And then me whispering her name when
She answered.
Whispering it again with
All the humility and fear of what I felt.
And she said,
“I can’t talk now, I’m with someone.”

I should have known the second time too,
When I hitchhiked to see her again,
Though, at least, the distance was down
To two hundred miles.